Optical Fiber is used in place of metal wire for many reasons including its ability to carry signals over very long distances with minimal attenuation or loss. They are also immune to electromagnetic interference, unlike the metal wires they are increasingly replacing.

Used primarily as the backbone of the modern telecommunications grid, the advent of Fiber Optics allowed for universal broadband Internet access for homes and businesses around the world.

Fiber optic cable works to transmit light because the hollow, round glass (or sometimes plastic) wires reflect the light back to the core of the wire, causing the cable to act as a waveguide. 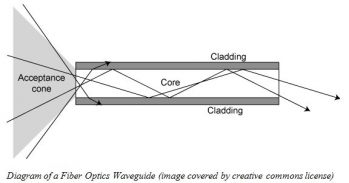 Fibers that support multiple propagation paths are called Multimode Fibers (MMF). MMF cable is generally used for short distance communication or in applications where large amounts of power are required.

Fibers that support a single mode are called Single Mode Fibers. This tends to be the type of fiber optical wire used in high-speed data transfer and as the backbone of the Internet.